ZAK Cooperage is a 3rd generation, family-owned business that prides itself on producing expertly-crafted new, white oak whiskey barrels. In 1991 we opened our stave mill in Athertonville, Kentucky and expanded into a cooperage that supplies distilleries both locally and internationally. Our cooperage is interested in supplying your distillery barrels. Please contact us for a quote.

"Athertonville had its beginnings in whiskey.

Around 1780, Wattie Boone, a relative of Daniel Boone, built the

Lincoln, Accepted a job at the Boone Distillery around 1814,

precipitating the family's move from the Sinking Spring Farm to the

its name. By 1867, the plant was recognized as the largest sour mash

distillery in the world. It employed 200 workers, and at capacity, it

produced about 6600 gallons of whiskey per day.

Atherton, who was born in 1841, was elected to the legislature

from LaRue County, and was chairman of the State Central

Athertonville was a booming small town, with a railroad spur, a hotel, general store, post office, churches, and school. It was second in population only to Hodgenville, until the advent of prohibition in 1918.

​     The distillery buildings fell into disrepair, but Seagrams purchased them in 1946, operating them for a few more years.

​     Athertonville's whiskey ties are not its only claim to fame. It is also the location of Abraham Lincoln's first school in Kentucky, where he was a student under Zachariah Riney.

Today, Athertonville is home to a few home-based businesses and ZAK industries..." 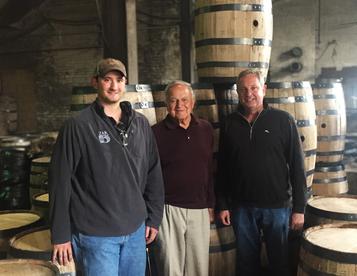 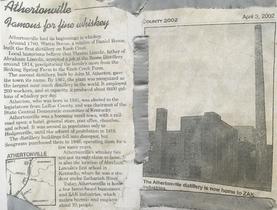